In Honour of Emily Woodward

The House That God Built

Our introduction to 185/187 Bristol Street, Guelph, came on Labour Day, 1989. At the time we were living at 41 Allan Avenue, just up the hill off Edinburgh. We had recently returned from a trip to Seoul, Korea where Bill was speaking at a conference. My mother-in-law, Emily Woodward, had come from Vancouver to look after the children, and had just left to return home by train. She was 79 years old and living alone, so we had suggested she think about moving to Guelph to be closer to us. She rejected the idea, as she had lived in Vancouver for more than 40 years and her friends were there.

As we strolled down Bristol Street, we observed a “For Sale” sign in front of 187 Bristol St. We could see a stone house at the front of the property, but there was a brick house just behind it. The next day we phoned the Real Estate company to ask whether both houses were for sale, and were told that they were. That evening, we phoned Bill’s mother and told her what we had seen. Her jaw must have hit the floor, as did ours. She told us that on the long ride home she had thought things over, and decided she wanted to move to Guelph! She had just mailed a letter to tell us that she would like us to find her a place to live – and she didn’t want to live in a basement!

That is how we discovered that there is something special about the Bristol Street property. It was unique in the city – a separate two – bedroomed house with a full basement, close to the main house. It would have been impossible to reproduce with current planning requirements. It came on the market at exactly the right time, and in exactly the right place – our boys would not have to move schools, and there was a bus stop at the end of the driveway to ensure that Emily could remain independent for a long time. The miracles continued, with Emily somehow being enabled to clear and sell her house all by herself, our house being sold, and all of us being moved in by the middle of November.

Emily and I soon began to research the history of this unusual property. Our best source was an elderly neighbour, Joe Bordigan, who lived in the house on the corner of Bristol and Magee. We knew that the stone house was built in the early 1870’s, and the brick house in the early 1900’s. Joe told us that the property, and the house next door belonged to the O’Drowsky family. Before its conversion to a dwelling, the brick house had been a warehouse for a tea business. Joe, himself, as a youngster had worked for the owner, and remembered the horse-drawn wagons pulling up to the big double doors to load tea chests. Emily had renovations done, enclosing the walkout steps from the basement and creating a new street level front door with steps up into the house through a sun room leading off the living room. The old front doors were replaced with a big picture window, through which Emily could enjoy the garden and somehow keep track of comings and goings in the neighbourhood.

Joe and the O’Drowskys were all parishioners of the Basilica, then the Church of Our Lady. We learned that at one time Catholic priests had lived on the property, which helps to explain why there has always seemed to be a special atmosphere of prayer. One day we were replacing the hardware on a door from the kitchen which would have originally been an outer door (the back porch had been closed in). This exposed the cavity between the stone and the plaster of the wall, into which paper had been stuffed for insulation. When we carefully extracted and smoothed it out, we found part of a Knights of Columbus magazine in good shape, and some fragile pieces of the Guelph Mercury from November 1918! There was a letter from a soldier, yet to be de-mobbed, and fascinating advertisements from the shops on Wyndham Street, advertising Christmas goods such as baking ingredients. With no malls, downtown must have been a lively place, with individual stores where you could find everything you needed.

Emily lived in the little brick house for 14 years, and loved it dearly. She never liked the trees and bushes to get too overgrown, as she had grown up in the open spaces of Oklahoma, and much preferred the sunshine and fields of rural Ontario to the lush vegetation of Vancouver. She was happy when the leaves fell from the trees in the backyard, exposing a rock formation in the bluff, which she called “The Cheshire Cat” after the cat in the story of Alice in Wonderland. When it snowed, the snow accumulated in crevices and she could see the cat’s smile, which disappeared when the snow did! The bluff is an old quarry face, and perhaps the source of the limestone with which the house was built. My father identified it as such when he visited one time – he found the holes for the dynamite sticks.

In 2002, Emily suffered a stroke and lost her long-maintained independence. In 2003 she moved into Oxford Lodge, and eventually into St. Joseph’s long-term care facility. Joe’s sister was there, and he visited both of them. He and Emily both died in 2008. The brick house, or “cottage” as many people called it, was home to a succession of people, and as a foreshadowing of what was to come, three of them were young women in need of housing and short-term support. Our son David was the last occupant, but bought a place of his own in 2010. Not wanting to be landlords, we began to look for a smaller property. Meanwhile, I was President of the Board of Michael House, and knew that they were desperately needing office space, while at the same time a need for supportive housing had been identified. One day, during a casual conversation about the possibility of building supportive housing on the Bristol St. property with Brian McCulloch, the architect, something seemed to click into place. After that, things happened very quickly! We moved out at the beginning of June, 2011, and to Bill’s astonishment, Michael House set up offices in the stone house within days! There was a pilot project using the “cottage” for supportive housing, while plans went ahead for the building of the supportive housing complex, later to be called “Emily’s Place.” . It felt a little strange to chair Board meetings in the room that had been our eldest son’s bedroom, and to have the Executive Director installed in our old bedroom!

Emily supported and volunteered for Guelph and Area Right to Life. We have no doubt that she would have approved of the transformation of her old home into “Emily’s Place,” even though she, like us, would have been sad on the day that “the cottage” was demolished. She had brought with her from Vancouver an enormous oak dining room set which had belonged to an uncle in Omaha, Nebraska. The buffet was housed in the dining area of the “cottage”, but the table was too big, and had to remain in the basement. When the Tiffany residence opened, there was a need for a very large table, and we donated it on Emily’s behalf. John Valeriote restored it to its original carved splendour.

We see how Michael House continues to be, as it has always been, “the House that God built”, and are delighted to send our greetings for the fifth birthday of “Emily’s Place!”

“The Cottage” Behind Original House 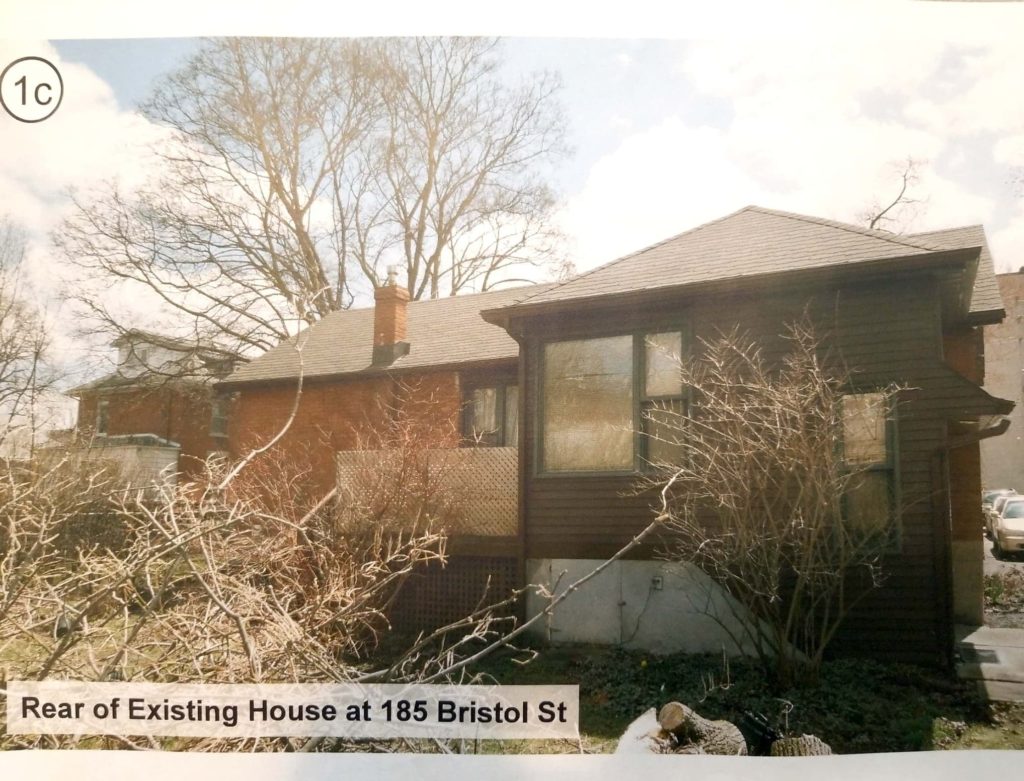 Check out this before and after. The picture on the right is today, these corner bricks are in the Michael House office behind the Office Managers desk. We always wondered what was there before.

It was such a nice surprise to receive this old picture from Bill and Sue (on the left), and now we know the original house had a fireplace and wood stove here.

Written on the back of the old picture: “Pre-Christmas day 1999. Fireplace. The Woodstove was installed as a Y2K precaution”.